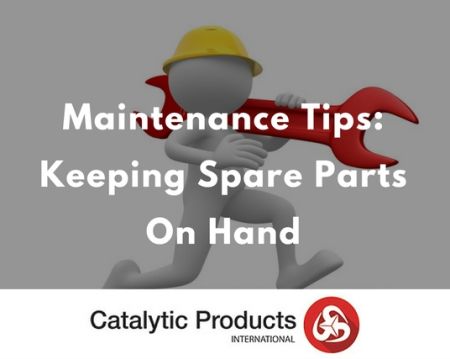 The Importance of Keeping a Spare Parts Inventory On Hand

The Power of Preparation

One of CPI’s clients recently learned the benefits of having a spare parts inventory. During a thunderstorm, their regenerative thermal oxidizer (RTO) shut down, and the maintenance manager contacted CPI’s service department. Our service technician spent some time on the phone troubleshooting the issue, and it was determined that a power surge during a lightning strike damaged two electrical components located inside the oxidizer control panel.

Some critical components include:

Additional recommended spare parts include components that are consumable, such as:

In this particular case, the customer had originally invested in the consumable spare parts. During an annual inspection, our service technician had reviewed the customer’s spare parts inventory. After pointing out the importance of having certain critical spare parts on hand, the customer had made a wise investment. Because of that, they had the correct critical component parts in their spare parts inventory. In just a short amount of time, they were able to quickly retrieve them from their store room and replace the damaged components. The entire downtime was only an hour and nine minutes. By having the spare parts on hand, the customer was able to recover quickly from an unexpected shutdown and minimize costly downtime.

CPI would like to make sure that if the unexpected happens to your oxidizer, you can recover quickly. We can review your system’s components and recommend the correct critical and consumable spare parts you should have on hand. For more information, please

For further reading, here are some related case studies and blogs about maintenance: