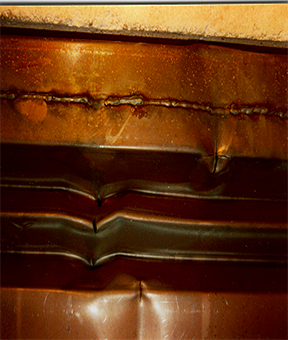 Thinking Outside the Box in Thermal Oxidizer Heat Exchanger Design

A thermal oxidizer (also known as a thermal incinerator) is a process unit for air pollution control in many industrial plants that decomposes volatile organic compounds (VOCs) at a high temperature and releases them into the atmosphere.

A heat exchanger is a device that transfers heat energy from one air stream to another, in order to conserve energy.

Thermal expansion is the tendency of matter to change in shape, area, and volume in response to a change in temperature, through heat transfer.

Linear expansion = change in one dimension (length) as opposed to change in volume (volumetric expansion).

That being said, the weak link of a conventional thermal oxidizer is the heat exchanger.

The inherent thermal expansion that takes place during the operation of an oxidizer requires the tube bundle to expand up to 1.5 inches in length by the time they reach their operating temperature (1,250° F – 1,500° F). Historically, tubes are welded to heavy tube sheets on either end, and an accordion style expansion joint or joints are welded to one or both ends of the bundle to allow for the thermal growth. As the tube bundle expands, the expansion joints take up the growth while maintaining an airtight seal between the dirty and clean airstreams.

Most heat exchanger expansion use a multi bellows/picture frame style designed to take up longitudinal compression and extension as the bundle heats up and cools. These work best in a single plane. In reality, a thermal oxidizer has many more forces acting upon the tube bundle. Hotter tubes are located nearest where the hot gases enter, and colder tubes are farther back in the bundle. The bundle does not want to expand and contract as a uniform entity.

The next issue is the gravitational loads imparted to the bottom of the end tube sheets that are expected to slide to allow the expansion joints to do their job. The forces on the tube sheets result in huge stresses on the tube-to-tube sheet welds, and the uneven growth of the tube bundle itself causes uneven growth in the expansion joint. This is especially important when you consider normal thermal oxidizer operation. The incoming dirty process gas is really used as a cooling air to lower the mean metal temperature of the tubes themselves. As processes come on line and off line, the incoming air flow changes, and the flow distribution of these “cooling” gases changes. The lower the incoming process flow, the less cooling the outer edge tubes in the bundle have, and the hotter the mean metal temperature becomes. The end result is the uneven tube expansion discussed above. Hot tubes will always want to grow more than colder tubes. 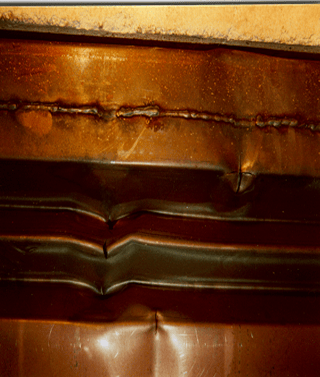 This is a damaged expansion joint after 3 years of service in a weekly start/stop operation. Many heat exchanger vendors now promote a “replaceable expansion joint” as the answer to thermal cycling applications.  However, they often forget the real costs of lost production, labor, materials, etc.

Unfortunately, replacing a damaged expansion joint is only part of the problem. When an expansion joint breaks on a heat exchanger in a thermal oxidizer, the dirty incoming process gases pass directly into the clean air stream and out the exhaust stack. This will mean you are out of compliance for your EPA permit, which can result in failed compliance tests and fines.

So what can you do, outside of removing the heat exchanger from the equation and exponentially increasing operating costs? How about removing the tube bundle expansion joint and allowing individual tubes to grow at their own rates? This will no longer require the entire tube bundle to grow as an entity. Now the issue of hotter tubes verses colder tubes becomes a non-issue.

How do you keep the dirty process air separated from the clean hot air?

Enter the floating shell & tube air to air heat exchanger. CPI has developed this technology, which allows individual tubes to grow without requiring conventional style expansion joints. CPI’s floating tube exchanger utilizes a tube bundle where the individual tubes are only welded at one end. They are allowed to “float” on the other end between two specially machined tube sheets. These tube sheets make up a pressurization chamber that is kept at a slightly higher pressure then either the dirty incoming process gases or the clean hot gases exiting the combustion chamber by a small external blower that uses fresh air to create the seal. This “air seal” keeps the dirty air from contaminating the exhaust air 100% of the time. Allowing the tubes to grow individually greatly reduces thermal stress as the unit heats and cools while maintaining separation of the clean and dirty gases. The end result is a stress free heat exchanger that you don’t have to worry about thermal cycling. You can now shut your oxidizer down on weekends without worrying about shortening its useful life.

Oxidizers operate under severe conditions. Many times, a system's useful life can be improved with insulation or heat exchanger repairs. In some cases, complete retrofits can improve safety and lower operating costs. Are you looking to install a new air pollution control device, or would you like help evaluating your current system? With over 47 years of experience, Catalytic Products International has the knowledge and experience to present clear concepts to solve your most challenging environmental and efficiency problems.