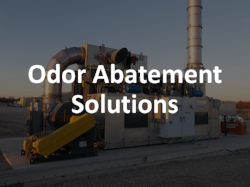 Odor issues related to industrial processes are not uncommon.  An odor is caused by one or more volatilized organic compounds (VOCs) that humans can perceive by the sense of smell.  The challenge is that “odor is subjective, and what is sweet to some, can be a nuisance to others.   In most cases the compounds that create the offensive odors are not present in sufficient concentrations to present a health threat, however they can diminish the quality of life of those exposed to them by their offensive nature.

The Federal Clean Air Act (CAA) does not specifically regulate odor, however, odors are typically addressed through State nuisance regulations or common law of the affected States.  Under the CAA, the U.S. EPA must control 187 hazardous air pollutants.  EPA controls these chemicals for their toxicity, not for their odor.  EPA requires them to be controlled at the source that generates the emissions.

Odors can be considered in the following ways:

Odor is inherently complex to analyze because it results from a mixture of chemical substances that are not perceived consistently by people.  While odor restrictions are not well defined, it is possible to quantify and characterize odor.  The measurement of odor concentration in the ambient air using a relative strength scale in terms of “odor units” is the most widespread method to quantify odors.

Both gas concentration and odor intensity must be taken into account when the effectiveness of an odor control system is evaluated.  There are many odor control strategies, and all have inherent advantages and cost benefits.

Since most compounds associated with nuisance odors can be detected or perceived at very, very low concentrations, the challenge is to either: 1) prevent the odor causing processes and compounds from generating the odors, or 2) destroy these compounds so that they cannot cause the odor.  Typical Options include:

Operational changes - Operational changes can be the most practical solutions to many odor issues. Such changes may include: restricting operating times of day, maintenance practices, modifying process or formulations to reduce odor creation or modifying exhaust stack releases to improve odor dispersion.

Alternatively, emissions and odors can also be reduced through the use of “point source” control technologies such as: 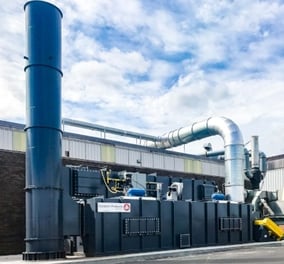 Oxidation – Thermal and catalytic oxidation are recognized as the most effective way to destroy odor causing compounds and does not involve using or generating other odor causing compounds.  Oxidation is commonly used to destroy odor causing compounds generated from a wide variety of industries including painting or coating operations, natural gas processing plants, petrochemical operations, printing operations, web coating, and sewage treatment plants.  Regenerative Thermal Oxidizers (RTO) are the most common oxidizer, which uses a combination of a high temperature, residence time and turbulence to ensure complete destruction of the volatile organic compounds (VOC) and odors.  The VOCs are converted into inert by-products, water and usable heat.  RTOs have low operating costs, produce no waste as a by-product and are energy efficient.

Dilution/Odor Masking Agents/Neutralizers – The use of such chemicals is often ineffective, or only partially effective and can be costly.

Scrubbers - Scrubbers use the process of absorption as well as chemical reaction (normally oxidation) to remove gases from contaminated air/gas streams.  Scrubbers typically utilize water and/or chemical reactants to absorb soluble gases from the air stream.  This process transfers the pollutant(s) to the liquid phase where they are neutralized or destroyed.  Scrubbers are an effective sulfur-removal technique and best suited for treating large air volumes and high intensity odor emission.  Scrubbers, however, are maintenance intensive, expensive to operate and require disposal of waste by-products.

Biofilters – Biological control systems can be used to remove gaseous pollutants from a process stream by aerobic digestion or consumption by microbes.  Biological systems can be effective on certain VOC species and some inorganic compounds. This technology is mostly effective for treating low concentrations of pollutants contained in large gas volumes. The technology is also applied in waste water treatment schemes, but this blog will focus specifically on biological control systems for air pollution abatement.

Founded in 1969, CPI is a leader in the supply of air pollution control systems providing a single-source solution to customer air pollution requirements.  CPI has successfully engineered solutions to VOC and nuisance odor problems throughout the United States.  Based on our experience, installation of an RTO is the most effective and most environmentally-responsible solution to address VOC and nuisance odor concerns.

Here are a few blogs on Odor: